New Book : Your Words Will Sharpen 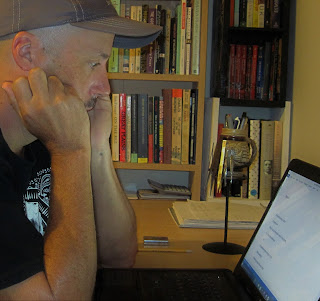 To start out with the dream of becoming a writer or poet in 1989 was to start out in a land of obscurity and rejection. You stood very little chance of being read by anyone, much less read by many. Now, twenty-six years later, Jason E. Hodges has been published by sixteen different publications, and had over one hundred and ten thousand page views on his blog, The Dirt Worker’s Journal. His fourth book, Your Words Will Sharpen, is an in-depth look into Hodges’ world through the eyes of poetry and prose. You see the people he encounters on the streets of his hometown, Gainesville, Florida, and on walks along Matanzas Bay in the old sandy city of St. Augustine. He takes you through life in the factories, the carwashes, and the jobs that bring on old age with speed. All of his daily encounters, along with icons of pop culture, blend together beautifully in this book to reflect the thoughts and memories of this modern poet. Your Words Will Sharpen is a fearless gaze into one’s self teetering on the line between sanity and truth.

Quotes In Photos One 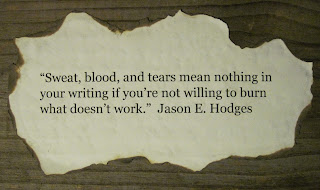 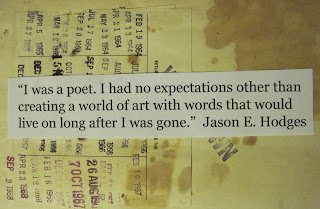 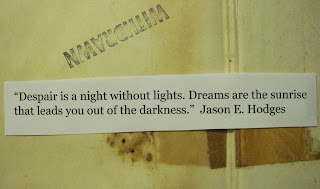 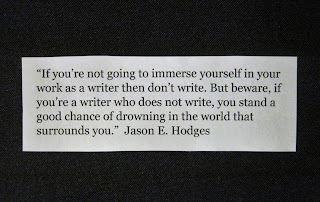 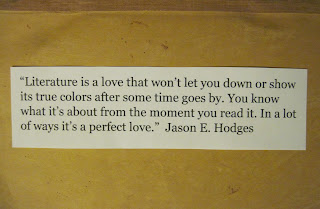 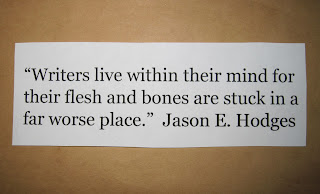 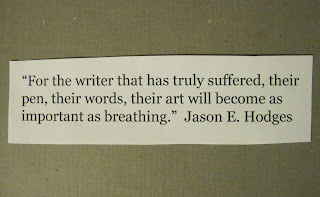 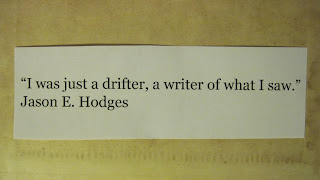 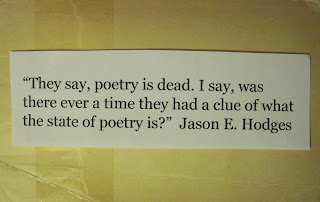 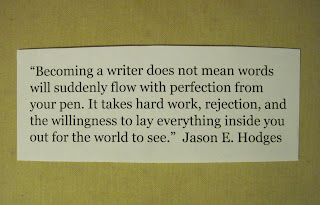 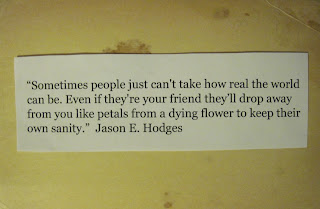 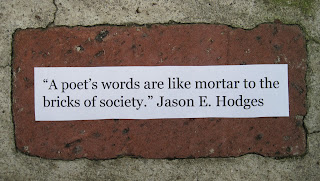 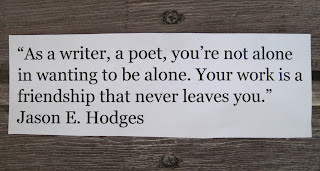 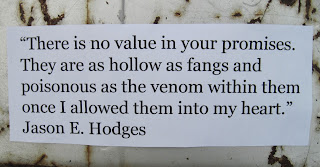 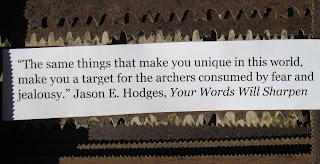 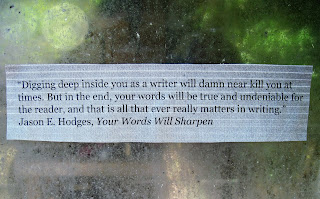 Despair is a night without lights. Dreams are the sunrise that leads you out of the darkness.

They say, poetry is dead. I say, was there ever a time they had a clue of what the state of poetry is?

I was a poet. I had no expectations other than creating a world of art with words that would live on long after I was gone.

There is no value in your promises. They are as hollow as fangs and poisonous as the venom within them once I allowed them into my heart.

For the writer, madness should seep slowly out of them from the world they endure each day.

As a writer, a poet, you’re not alone in wanting to be alone. Your work is a friendship that never leaves you.

I asked my father if we were rich or poor when I was a small child. He said, “We were rich with God’s love.” I knew from that moment forward, we were broke.

Destroying the planet is like stepping from a moving train and thinking it will all work out.

Your dreams don’t stop being dreams because of circumstances.

Poets, with no sponsors, no agenda, are the truest form of freedom today, bleeding out every drop of themselves for the world to either hate or devour.

Each morning the winds of the city moan and weep with lost souls clinging to hope of reliving the memories of yesterday.

History is the roadmap to a better tomorrow. Destroying it is getting rid of any chance of what not to do for future generations.

A poet’s words are like mortar to the bricks of society.

Becoming a writer does not mean words will suddenly flow with perfection from your pen. It takes hard work, rejection, and the willingness to lay everything inside you out for the world to see.
Posted by Jason E. Hodges at 2:26 PM No comments:

Speaking To The Man Upstairs

It was a halfway house on East University Avenue


At the end of the long wooden hallway


Each plank seemed to creak out


As my small feet walked across them


I was only ten years old at the time


I had been sent to grab some stew meat


From the only working refrigerator


Where all the residents kept what little they had


The community sink and bathroom


Were on the same end of the hall


There were only five or six rooms upstairs


He was standing outside his doorway


“Grabbing some stew meat for dinner.”


He pulled hard on his cigarette


As he exhaled waves of smoke


He said, he burned it


Fell asleep while smoking in bed


My mother later said, he was a drunk


He had probably passed out


Woke up on fire


She said, he was an ex-con


That he hadn’t been out long


He pulled hard on his smoke once more


“They carried him out the other morning.”


“He died. Been dead a week before anyone noticed.”


I didn’t or couldn’t understand this at the time


How could anyone pass away and no one miss them?


Must have been written


The man thumped his ash into the sink


Then spoke up once more


“Not many miss you when you’ve gone that far.”


I ran into the man upstairs at least once a week


He would tell me stories of losing his friends


He said, the war was nothing like the movies


And sometimes he didn’t speak at all


I didn’t understand a lot of what


The man upstairs said back then


But his words have become


Some were just the way it was back then


When I would talk to the man upstairs
Posted by Jason E. Hodges at 5:10 PM No comments:

Dishes in the sink


Trash needs to be taken to the curb


Grass needs to be mowed


But, lessened as a human by your belittling boss


With nowhere to go


Living in a low rent motel


Abandonment by family and friends


When the lies and promises are presented to you


Day after day with a smile


Until the end is upon them


The spirit and the mind


That has to be tapped into


From Archimedes to Stephen Hawking


Abbott is an artisan of the body


With weights of steel


As well as Da Vinci


Sculpting in his medium of marble


It all has to start by tapping into


The spirit and mind


Sometimes you have to sail away


From who you think you are


To become something better


To create his perfect art


We must move away from who we are


To what we can be


Move in our thinking


Tapping into one’s self


For the first time


Something moves within you so fast


What power lies within our dreams


No more than Franco Columbu


Woke up one day a weightlifting champion


Hard work gets you where you want to go!!!


But you have to want to get there


It all starts in the spirit and mind


In anything you choose to do!!!


Pushing her way to the top


An inspiration for us all


To do more than just getting by
Posted by Jason E. Hodges at 2:05 AM No comments:

Tandem movement toward the machine


We are the machine


On the world we see each day


If think Thoreau was frustrated with man’s greed


Back in his time


With wars waged without ever thinking of peace


With the natural world being


Eroded away for its resources


It seems people are either


Racing through each step of the day


Or moving at a turtle’s pace


Yet, most all are glued to their phones


Waiting for the next bell to chime


It’s up to you to set the pace


To do more than just getting by


Not tuning it out like an old transistor radio


And tuning into someone else’s achievements


Then swiping to the next story


There’s a few writing their own


Blazing their next path


Neo Nadi notably knowing who to poke next


With his silvery sword outstretched


When you’re willing to push yourself to exhaustion


Horseshoes won’t get you to the top of a mountain


A Rabbit’s foot wasn’t so lucky for the rabbit


It was chopped from


For, luck changes each time you look upon it


So does the world as


The tandem movement toward the machine


STOP, like Thoreau and look right in front of you!!!


See truths for yourself


Not what someone tells you to be true


No political affiliation or origin of birth


They’re only looking for a host


The bear, the big cats of the savannah


Are just as colorblind


They know nothing of someone’s pigment or ideology


Humans are the only species


That practice prejudice to perfection


The snake strikes the foot that steps on its back


Not the feet that walk around him


The wolf hunts the weak


Not the opposite refection of him


On the world we see each day


Live your life in truth and change things for the better


For, others have you in their vision


As their eyes move back and forth


On the world they see each day
Posted by Jason E. Hodges at 1:09 PM No comments: